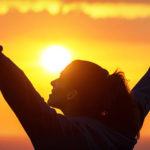 Well, The end is not yet. Jesus did not come on May 21st. What does it mean? It means that we can not pretend to know God’s will concerning the exact day of the end and his second coming. He said there would be false prophets and people who would lead you astray. “So if anyone tells you, ‘There he is, out in the wilderness,’ do not go out; or, ‘Here he is, in the inner rooms,’ do not believe it. 27 For as lightning that comes from the east is visible even in the west, so will be the coming of the Son of Man. 28 Wherever there is a carcass, there the vultures will gather.” Matthew 24:26.

So what is the child of God’s proper attitude toward His coming? “Concerning this salvation, the prophets, who spoke of the grace that was to come to you, searched intently and with the greatest care, 11 trying to find out the time and circumstances to which the Spirit of Christ in them was pointing when he predicted the sufferings of the Messiah and the glories that would follow. 12 It was revealed to them that they were not serving themselves but you, when they spoke of the things that have now been told you by those who have preached the gospel to you by the Holy Spirit sent from heaven. Even angels long to look into these things. 13 Therefore, with minds that are alert and fully sober, set your hope on the grace to be brought to you when Jesus Christ is revealed at his coming. 14 As obedient children, do not conform to the evil desires you had when you lived in ignorance.” 1Peter 1:10-13.
Set your hope on the Grace to be brought to when Jesus is revealed at his coming. The hope of His coming and finally seeing the Lord in person puts joy in all those who follow Jesus. “I go to prepare a place for you that where I am you will be also,” this is the promise of his coming when the Son of God will make sense out of it all. The pain and suffering and heartache will pale in the light of His coming. He will right every wrong, heal every hurt and fulfill every desire of our heart. We will be his bride forever to be with Him. The universe will be remade and evil will exist no more.

The angels marvel at this and rejoice in the grace of God who while we haters of light he reached down and called us to the light. He remade us into the children of light no more children of darkness. A mystery of love which will be revealed in eternity with Him. Delighted in this we retain this hope of his second coming and look to that day when we shall see Him in His glory.

Of the season of his coming, we can know for we live in those days. The birth pangs of the end days are here. The events point to his soon coming. The sunset and sunrise both remind me that the days are short. Love life and enjoy the relationship we have in Him. Work for it is still daylight because the night comes when no man shall work. Consecrate your self to this, reach out to his mercy and love each other as he gave us commandment. For in this the world will know that we belong to Him. Come into the light. Even so come quickly, Lord Jesus. 🙂 Walt