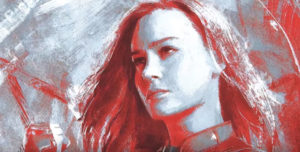 The social media war for the minds and hearts of the society we live in today is evident to any rational thinking person. Traditional values are being threatened by progressive thought and the media news and the majority of the entertainment world leans towards liberal ideas and biases. It really is not arguable that this is not happening right here in the land of the free and even worldwide.

With this in mind, I want to talk about the content today in TV and film and how it has changed over the years. All societies change as those who are in power and teaching methods change over the years. The entertainment industry is no different and has become something that does more than entertain in TV and film.

Why do you go to movies? Why do you watch a television program week after week? My friend answered this 80% to escape and 20% to be loyal. We have challenges in everyday life that require our constant attention and it is beneficial and gratifying to see something to inspire or give us hope and reinforce our reason for living or just make us laugh. Movies like The Shawshank Redemption, Schindler’s List, Gone with the Wind, and even The Wizard of Oz help to entertain for a 2 hour period while we conceder the content value to us in these movies. This is why there is no right or wrong in personal evaluations of movies.

When I first watched Forrest Gump back in 1994 I was not impressed with the story but a rewatch later impressed me with the simple message of how unimportant intelligence can be and how important direction and morals can play in one’s life no matter what your IQ and all people have worth in society. It’s a Wonderful Life with James Stewart, a classic, taught me to not judge myself or others importance and place in life. These movies help us escape our current situation and help us look optimistically forward in life.

Sometimes you watch a film or TV program to be loyal to a series or writer of a book because of past enjoyable experiences with the program or movie or genre. Star Trek, Star Wars and Marvel Films are examples of loyalty in film making and TV programs. I have always been loyal to the superhero genre in movies and TV. Most of the Marvel movies have been enjoyable to me and some of the DC Films I have liked. The CW network which is the place of the successful past Smallville program highlighting the early life of Superman has several programs in the Superhero world. The new generation of heroes on the network includes Arrow, The Flash, Supergirl, and Legends of Tomorrow plus the new program Black Lightning which premiered January 16, 2018.

The Flash has been very popular since its premiere in 2015, Arrow has survived some lean times in viewership but has some very loyal fans since 2012. Legends of Tomorrow and Black Lighting have survived the rating war so far. The most controversial program from the very first season has been Supergirl. One of the first things the writers and producers did was to create a young adult-oriented television program with the homosexual relationship with Agent Alex Danvers Supergirl’s earthly adopted sister and Maggie Sawyer a detective with the police. Many parents questioned if their children should be watching a program which presents adult questions of sexuality so forbad their children to watch.

Melissa Benoist the actor who plays Supergirl or the person who controls @supergirlthecw answered a Twitter user @TaronYoung who complained to the Supergirl Twitter page about having to explain homosexuality to his 7 and 10-year-old children. The Twit read “Good, explain to them that love is love and it’s beautiful no matter where you find it. #Sanvers #Supergirl”. I find this response amazing because their love and relationship did not last and the writers broke them up the next season. 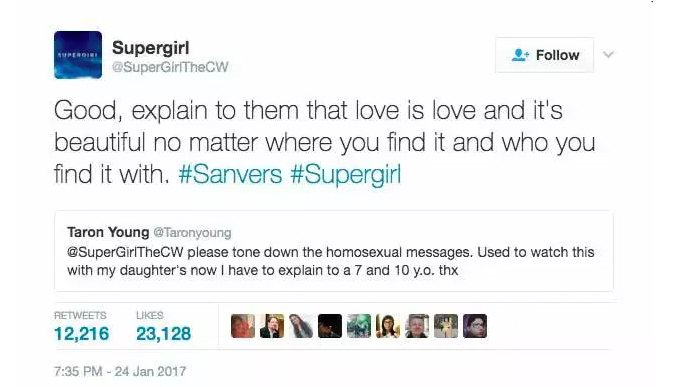 The program is filled with dominant women as hero and villain alike. And their humiliation of Superman to me was the worst. He has admitted to her twice that she is stronger than him, the first time after she knocked him out and the second time was when a fake Superman beat up on him and he remarked that she could do a better job protecting the earth than him. The feminist agenda is clear with Livewire calling males the inferior sex.

The sexuality of characters seems to be very important to the producers and writers introducing the first transgender superhero on TV. Nia Nal (also known by her alter ego Dreamer) is a fictional character from the television series Supergirl, portrayed by actress Nicole Maines. The character is based on and is depicted as an ancestor of the DC Comics character Nura Nal / Dream Girl. She debuts in the fourth season of the series. Nia Nal is the first transgender superhero on television. From Wikipedia

In the movies, the role of women is very important to the movie producers who want to portray them on the big screen. The Marvel based Captain Marvel has been billed as the most powerful hero in the MCU by the head of Marvel Films Kevin Feige. This is the first movie by Marvel featuring a woman in the lead role with many people asking Marvel over the last 10 years when they would feature a female lead in a movie. Many people both male and female would like to see Scarlett Johansson as Natasha Romanoff / Black Widow in her own movie but it never happened.

Captain Marvel has been called the answer to the feminist in the world clamoring for their superhero. While I don’t know for sure if that is true Brea Larson the Oscar-winning actor playing the Captain did not help the perception by saying she did not want the critics of the movie to be dominated “by white 40-year-old men”, leaving us to question just exactly what she meant by that. This is all a moot point because the public has not seen the movie yet.

If I want to participate in the social war that is being waged in the media I can be part of that effort. The social war has a venue and it can clearly be followed in many media outlets and films. With this in mind, why do you go to see a movie or watch a program week after week? The entertainment value of what I watch is based on the content and message of the movie. Make me laugh or cry or cheer and feel better for the few moments of viewing. Enlarge my imagination of possibilities and teach me the yearnings of the heart in the characters I see whether they be gay or straight, rich or poor, black or white, conservative or liberal, and male or female.

When you make a movie help me to escape the dreary and hopeless things in life and be careful the messages you share in the pages of what you write and scenes in a film or episodes of a program. TV subscriptions are expensive and the price it takes a family of four to go to the movies goes up every year. Tell a good story and keep the social messages to a minimum and if they must be there make it pertinent to the story. Make me think but not drown in the unrealistic flood of social change. And last but not least, know your audience and what they want in the genre of your choice. See you at the movies. 🙂 Walt