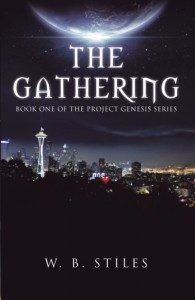 The Gathering: The Project Genesis Series

My new novel under my pen name W. B. Stiles, titled: The Gathering: Book One Of The Project Genesis Series is in print now and is available at Amazon and Barnes and Nobel or your closes retail Book Store. Here is a description of the novel:

Jane Watkins, a reporter for the Seattle Gazette newspaper, goes to meet a source with information about a serial killer known as the Slasher—only to find herself facing not an informant but the killer. She nearly meets her death but is miraculously saved by a glowing figure. He calls himself the Advocate, and Jane’s encounter with them both is about to change her life and theirs forever.

It seems the Advocate—whose real name is John Tomar—is one of several people who have developed superhuman powers through a substance known as the Genesis Factor. On the estate of his father, Nathan, and with his guidance and protection, John works to gather and train those with special abilities in service of a mission for the greater good—a task that draws the eyes of enemies. Meanwhile, Jane feels driven to discover the truth about the mysterious man—even more so when she sees a picture of him flying away from the scene of a midair explosion.

In this first book of the Genesis Project series, the paths of the hero and the reporter converge in an exploration of good, evil, human, and superhuman, considering who we are, where we came from, and where we are going.

What if you could see into the other dimensions and react to the supernatural? What if they walked among us? People of great power. The Gathering of these people will change the world as we know it. The good and evil exist around us. Who controls them and to what end?

And here is an Excerpt of the novel:

“The tribal leaders ridiculed Smoha and said he must stop sharing his dreams because they already had a shaman. The shaman told the leaders and members of the tribe that Smoha was controlled by an evil spirit and must be cast out. Finally, the chief listened to the shaman and ordered Smoha cast out of the tribe before his test of manhood. Driven out from his people many miles from home, he found himself near Fire Mountain. It was a forbidden place for the people of the tribe because of the bad magic there. Many braves never came back after venturing to the mountain.

“Smoha made a fire-less camp at the base of the mountain. Bobcats, cougars, and wolves lived in these woods. Also, there were black bears and the horrible bear, which is what the tribes called the grizzly, the largest and most powerful of all predators. The moon was out, but it was hard to see in the brush where Smoha made his bed. As he lay there, he could hear wolves howling to the moon. He figured they were not a threat, as they were too far away. He heard the hoot of an owl and the rustle of what he thought must be a raccoon in the bushes. He put on the outer garment, called a ruaha by some tribes; it would keep him warm. He also had the knife his father gave him, the blade made from bone and the handle from wood interlaced by animal leather to make it easy to handle. The spear he had was longer than most with a bone spearhead, and the shaft was made from the hardest wood his father could find. As he lay there, he prayed to the Great Spirit to protect him and give his life purpose.”

We use cookies to ensure that we give you the best experience on our website. If you continue to use this site we will assume that you are Ok with it.OkPrivacy policy