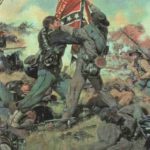 As a nation, we are 234 years old. Not the longest time to be a nation at all others have existed many more years. But there is special about the United States of America both in it’s beginning and present day. 13 colonies banded together to throw off the government of the most powerful nation of that day England. The odds were against them but somehow they prevailed and became a new “nation concealed in liberty and dedicated to the proposition that all men are created equal” Lincoln’s Gettysburg Address. We as Lincoln are engaged in a great Civil War again. Not one of guns and bombs but of ideas and laws. Progressive thoughts and ideas are ruling the day in almost all governments in the United States of America. The Congress and President using these ideas have changed the country from one of life, liberty, and the pursuit of happiness to managed health care, freedom for illegals, and uncertainty of the future and fewer jobs.

The confusion of the day has affected all areas of the economy and made the world unsure of our position in the leadership of nations. The business world is frozen because they don’t know what the direction to go. Lending is virtually dead the banking industry funded by the government is slow to give the money to investors. The rules have changed for so many things that fuel the money flow to Americans and business. We were promised change and that is what we got. The confidence in government is historically low. We are engaged in 2 war fronts that cost the taxpayer billions. We run the war campaigns not knowing what it means to win. Taxes are going up on all people and businesses that make the country grow. Our debt as a nation has never been this high. While regular people are cutting back the federal government is spending more than ever. How long this can be sustained before a financial meltdown no one knows. And We are told that we are on the way to recovery by those pushing these progressive ideas. We can’t go back to the “failed policies of the past” we are told. They don’t see any failure in what they are doing.

September 11, 2001, changed life in America. Terrorist killed over 3000 people and woke us up as a nation to the fact that we are not invincible as a nation we can be attacked successfully by others who want our downfall as a nation. There are people that hate us. But that is an outside force. We have fellow Americans who are taking us in a direction which will destroy the American way of life as we know it. It is liberalism or progressive ideas. It is not of any one party but a way of life that was spawned in the dark ages. The elite in government know what is best for us we are not a nation of the people and by the people. On September 12, 2001, the churches were full in remembrance of what had happened the day before. We as a nation turned back to God and asked him to bless us as a nation again and protect us from the evil of the day.

“If my people, who are called by my name, will humble themselves and pray and seek my face and turn from their wicked ways, then will I hear from heaven and will forgive their sin and will heal their land”, 2 Chronicles 7:14. It is time for those who are called by His name to humble themselves and pray and repent from evil and turn to the God of mercy. God’s promises are true we have hope in the future because of Him and only through Him do we receive life. The United States has been great because of God’s providence. He gives us purpose as a nation if we turn back to him. Fill the churches up again and turn your heart towards God. Seek the favor of God through humility and worship. Give Him his due.

This is truly a spiritual battle. For too long we have been self-seeking, “what’s in it for me”. Life is so much more than pleasure and things and entertainment. It is family and friends and God and country. We need to get back there. We need to give thanks for the greatest Nation of modern times and ask God to bring us back. Our liberty as a nation depends on the direction we choose. Choose well America. 🙂 Walt